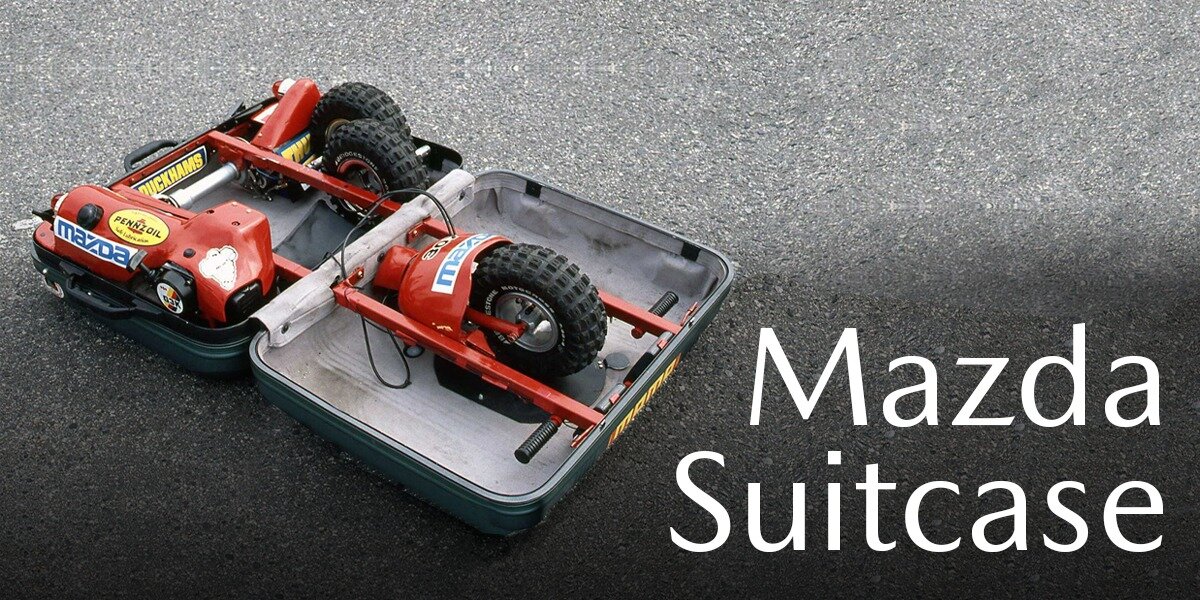 The late ’80s and early ’90s were exciting times for Mazda. Overwhelmed by the demand for its then-new Mazda MX-5 roadster, becoming the first Japanese manufacturer to win the gruelling 24 Hours of Le Mans in 1991 (and the only one with a rotary!), and presenting a hydrogen-powered rotary concept called the Mazda HR-X. Confidence around that period was high at the Mazda head office in Hiroshima. With the confidence and the company culture to push for creativity, Fantasyard was introduced. Fantasyard was an in-house competition held between 1989 and 1991 in which teams from different departments vied to come up with the best creative mobility ideas. One team came up with a unique and very creative answer to personal mobility…..

The “suitcase car”, a three-wheeled concept was inspired by a vision of getting around airports more efficiently. Its creators, a group of seven engineers from Mazda’s manual transmission testing and research unit, received a small budget (¥700,000) to bring their vision to life. After purchasing a pocket bike and the largest suitcase they could find, they got to work.

The result was simple yet ingenious, with bits of the pocket bike including its 33.6cc two-stroke engine built into a 57cm x 75cm Samsonite suitcase. It took only a minute to assemble: swivel the front wheel into the “upright” position through a removable section of the case, insert the rear wheels, attach the seat above the rear axle, and off you went!

Whilst only a prototype from an internal company creativity competition that would never see production, the Mazda suitcase car actually displayed Mazda’s DNA in more ways than one. A fun-to-drive vehicle with a low centre of gravity, much like the now legendary (and the worlds best selling 2 seater sports car) the Mazda MX-5, creatively designed 3 wheeled transport like Mazda’s very first vehicle the Mazda-Go tricycle truck back in 1931, and it showcases Mazda’s ongoing commitment to engineering ingenuity and defying convention to creative vehicles that fun to drive.

Today it is believed only the US model exists, with the original prototype accidentally destroyed and the European model just disappearing under unknown circumstances. Over its 100+ year history, Mazda has certainly proven they are willing to push their creativity through design and engineering to come up with some truly unique, unexpected, and amazing vehicles.