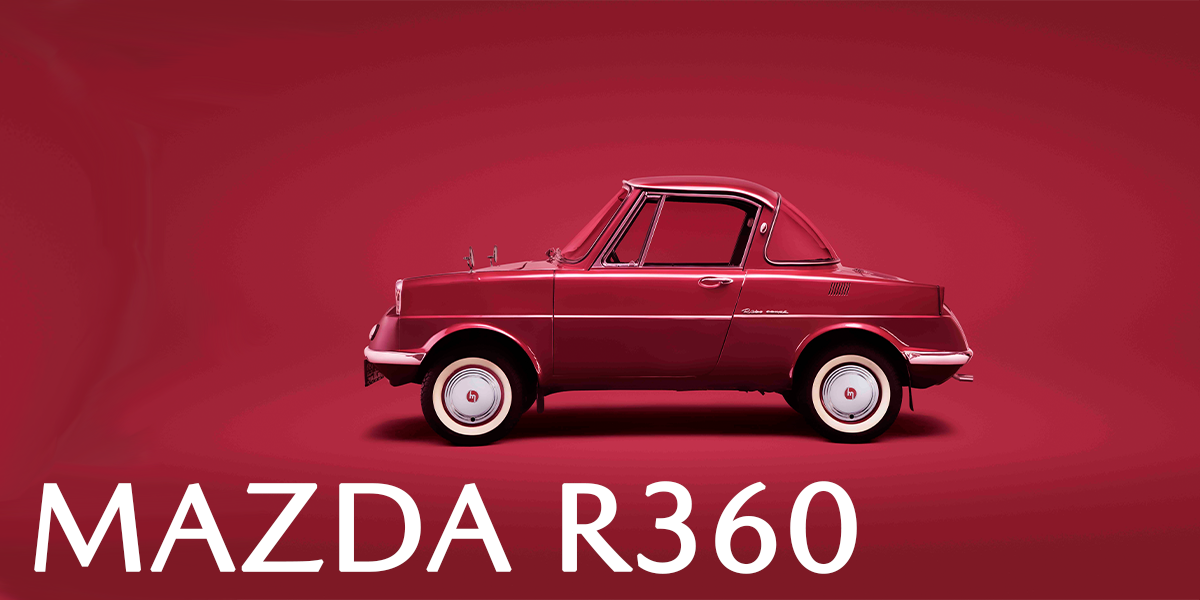 The R360 ‘s importance cannot be understated, not only was it Mazda’s very first passenger car, but thanks to its instant and overwhelming success, it helped catapult Mazda Motor Corporation  (Toyo Kogyo as it was known at the time) towards passenger vehicles with a focus on innovation, style, efficiency,  affordability, and driver engagement.

Launched in May 1960 in Japan only, the R360 was an immediate best-seller, on day one of its launch it sold just over 4,500 units. By the end of 1960, the R360 made up nearly two-thirds of the growing “kei car” (microcar) segment, and made up 15% of the entire Japanese domestic car market! It wasn’t the first kei car on the market, but it immediately became the most popular.

The R360 was very efficient, featuring a four-stroke engine that was quieter, cleaner, more durable, more user friendly, and more economical than the two-stroke engines used by the competition at the time. The R360’s 360cm3 V-twin put out 12kW and 22Nm of torque, which doesn’t sound like much but considering the R360 only weighed 380kg, it was enough to hit a top speed of 90km/h! The kei car segment was limited to vehicle sizes (3m x 1.3m) and engine displacements (360cm3). The Japanese government hoped that the combination of a strong domestic passenger car industry, focusing on affordable models, would put the dream of car ownership within reach of the general public.

Mazda knew that the key to success with the strict limitations of the kei car segment was creative design and engineering solutions. With the engine size restricted, Mazda turned its focus to weight. Such was the obsession with shedding mass that it was labelled internally as the “gram strategy”. The engineers looked everywhere for an opportunity to shed grams, innovative use of materials such as aluminium for the bonnet, aluminium cylinder heads, magnesium alloy for the transmission casing and oil pan, and even a specially developed rear window made of plexiglass. The frameless monocoque chassis structure was not only lightweight, but also offered above average crash safety.

A cut above the rest

Whilst the R360 light weight, Mazda’s engineers also introduced four-wheel independent suspension to help reduce vibration and improve ride comfort (especially important on Japanese roads in the 1960’s!). Most of the competition offered a 2 stroke engine matched up to a 3 speed manual, not the R360. With it’s class leading 4 stroke engine, customers had a choice between a 4 speed manual or an option semi-automatic transmission. This was Japan’s first torque-converter automatic!

The R360 was an absolute gem to drive and would be the start of an ongoing engineering philosophy at Mazda that is still evident to this day. Jinba Ittai means “horse and rider as one”, which refers to Mazda’s intuitive connection (perfect harmony) between driver and car. This produced a superior driving experience for a kei car of that era, and the joy of driving is something Mazda is still very passionate about to this day.

Standing out from the crowd

While most kei cars were either sedans or wagons, the Mazda R360 was designed as a stylish 2 door, four seater coupe. Looks alone weren’t the only factors for the R360’s runaway success, Mazda also managed to make the R360 affordable. Despite the revolutionary and class leading engineering and costly materials, Mazda’s efficient production kept the cost down to ¥300,000 (US $830), making the R360 not only highly desirable but also attainable to the general public.

Kei cars have come and gone over the years, but none can lay claim to a legacy that the R360 created. The R360 helped define Mazda’s unique car making philosophy. With a focus on innovation, balance, lightweight engineering, and driving fun that is still at the core of everything Mazda does today. Mazda even celebrated it’s 100 year anniversary with unique models that pay tribute to the original R360, a great way to celebrate the past whilst still looking to the future.