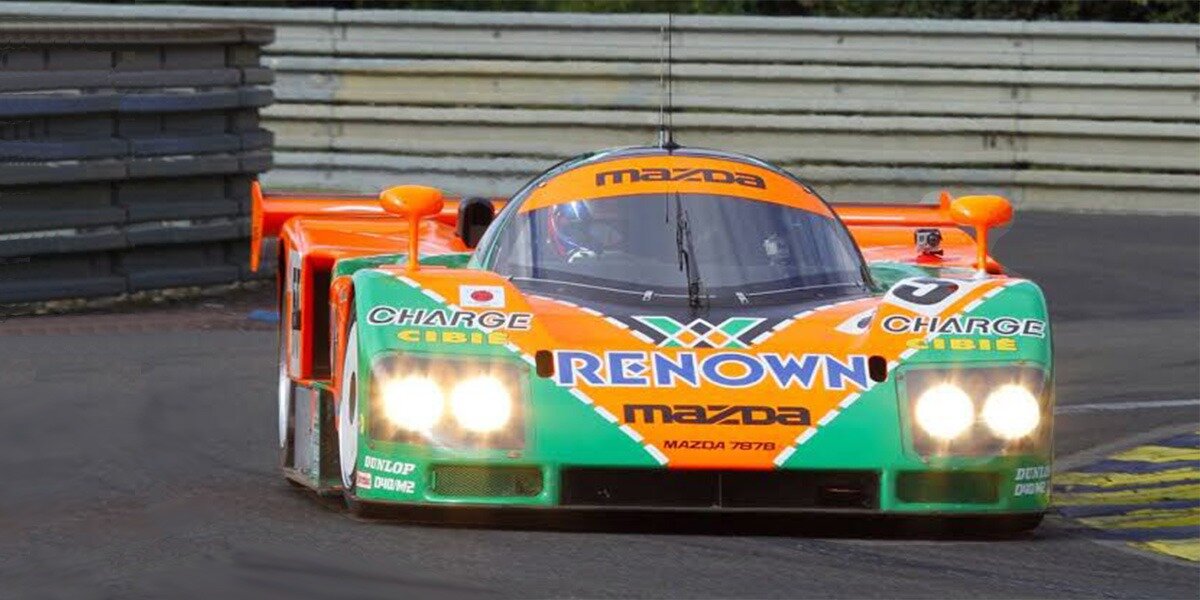 The legendary Mazda 787B!

The development of the 787B

Mazda started endurance racing with the 717C in 1983. By 1988 Mazda had evolved the concept into the 767, a pair of these entered the 24 Hours of Le Mans, finishing 17thand 19th. Next year upgraded versions of the 767 known as the 767B entered the race to finish 7thand 9thoverall. These early and promising results lead to what would evolve into the winning 787B. The initial design for the 787 was based on the 767 and 767B. The 787’s designer, Nigel Stroud, made some notable changes. The original 767’s 13J Wankel rotary engine was replaced with a new 2.6L R26B engine. Whilst it featured a near identical layout as the 13J, it did feature new design elements like 3 spark plugs per rotor, carbon fibre apex seals, variable length trumpets, and continuously variable intakes. This pushed the R26B to make 694 kW at 10,500 rpm, Mazda chose to limit the engine to 485 kW @ 8,500 rpm to improve reliability (and longevity).

As the car was developed, the radiator design was changed to optimise cooling and allow for smoother body work to help with aerodynamics. In 1991 the suspension geometry was changed to accommodate larger and wider tyres, and carbon brake discs were added for the first time. As well as an improved ECU to improve engine power, it was still limited to 6,500 rpm for reliability. For those who were lucky enough to see the 787B’s race, the engine noise was unlike any other.

Mazda got former F1 driver and 6 time 24 Hours of Le Mans winner Jacky Ickx to return as an advisor, and under his recommendation Mazda partnered with the French Oreca team. With this highly experienced and successful combo, they managed to convince the FISA (Fédération Internationale du Sport Automobile) to allow them to run the 787s at a lower weight than their competitors. This meant the 787Bs could weight as little as 830 kg, compared to their competitors which had to weigh 1,000 kg. The 24 Hours of Le Mans team consisted of Johnny Herbert / Volker Weidler / Bertrand Gachot in the #55 787B, Stefan Johansson / Maurizio Sandro Sala / David Kennedy in the #18 787B, and Yojiro Terada / Takashi Yorino / Pierre Dieudonné in the #56 787, and managed by team manager Takahashi Ohashi.

The Mazda 787B wasn’t considered a favourite to win the 1991 24 hours of Le Mans for many reasons. It wasn’t the quickest over one lap and the three Mazda 1991 entrants qualified 12th, 17th, and 24thfastest (later pushed back to 19th, 23rd, and 30thdue to regulations splitting the C1 and C2 class). It wasn’t the most powerful car on the grid either, with the Mercedes-Benz C11, the Jaguar XJR-12, and the Peugeot 905 showing significantly higher horsepower. Where the Mazda 787B gained its advantage was its incredibly low weight (830 kg), high cornering speed, amazing fuel efficiency, and unrivalled reliability. As the 1991 race unfolded, these advantages (and a little bit of good luck!) would help the Mazda 787B create motor racing history.

Mazda entered 3 cars (#18 787B, #55 787B, and an older #56 787), the #55 787B was painted in the vibrant orange and green paint scheme. This was done to honour Mazda’s major sponsor, Japanese company Renown. The other two entrants were in the team’s standard white and blue livery. The two 787Bs were run on different strategies, whilst the #18 787B was instructed by team advisor Jacky Ickx to focus on saving fuel by concentrating on smooth braking and acceleration, the #55 787B was told by team manager Takahashi Ohashi to push for faster laps. Previous outings for the 787Bs gave Ohashi and the engineers the confidence that the car was reliable (and efficient) enough to push as hard as possible. The #18 also had a lower gear ratio to increase fuel efficiency (sacrificing 20km/h top speed) versus the #55 running a higher gear ratio.

The #55 787B moved from 19th to 3rdin the early stages of the race, with the #18 787B two laps behind. As the demanding race progressed, the #55 787B moved up to 2ndwhen the Mercedes-Benz C11 went off track and had to pit for transmission issues. With first place a long way away, as the race progressed the leader was instructed to reduce its speed to aid fuel efficiency. Eventually the lead Mercedes-Benz C11 had to retire due to mechanical issues. The realisation that it was their race to lose, the Mazda team decided to keep Johnny Herbert in the car as he was the most experienced at the circuit. Herbert had to do 3 stints (45 minutes log) to eventually cross the line in 1stplace!

Herbert’s physical exhaustion was clear, and he had to be assisted out of the car and taken to the circuits medical centre. Because of this, he missed the podium celebration. Although Herbert would later go on to blame a dodgy meal prior to his last stint as the cause of his illness!

The #55 787B worked flawlessly for 362 laps, covered a total of 4,932.2km which was a new record for the recently modified circuit. For the whole 24 hours, the car had to replace a blown headlamp bulb, a rear-wheel bearing as a precaution, three front brake pads, one rear brake pad, and a front brake disc. Given the demanding nature of the race, this was simply amazing. The #18 787B would finish 6th, and the #56 787 would finish 8th.

Once the race was finished, the Mazda engineers started taking the winning #55 787Bs engine apart. Upon inspection, they concluded that the engine could have gone another 24 hours without any maintenance! Considering the 787B was not the fastest car on track, over the long (and demanding) 24 hours the 787B had fewer pit stops, had shorter pit stops, required fewer parts to be replaced, and thanks to its amazing fuel economy saved time on refuelling.

Following the 1991 24 Hours of Le Mans, Mazda retired the winning car (787B-002) but continued to race the other two 787Bs (001 and the newer 003) until the FIA changed the regulations for the 1992 season. The winning 787B-002 is displayed at the Mazda factory in Hiroshima, along with its amazing 2.6L R26B rotary engine. 20 years after its famous victory, and lengthy restoration,  the #55 787B-002 would return to Le Mans as a demonstration vehicle, driven by none other than Johnny Herbert. The 787B-002 has also made an appearance at the Goodwood Festival of Speed, and is displayed at various motoring events/races across Japan on a regular basis.

Mazda produced two replicas and gave one of them to the Le Mans Museum. The car usually makes appearances at the annual Sevenstock shows, and has made two appearances at the Monterey Historics event in 1999 and 2004 and still bears a pair of small oval racing stickers behind the side windows, referring to its appearance at the 1999 Goodwood Festival of Speed, when it was reunited with and driven by Gachot.

Today the car is considered by Mazda and Wankel enthusiasts as one of the most iconic race cars to come out of Japan. The 787B has been celebrated by every major toy and model company in and outside Japan. It is considered as the most popular of the group C cars and has appeared in several video games, such as the Gran Turismo series, Forza Motorsport series, Real Racing 3, Assetto Corsa, Race Driver: GRID, and Racing Rivals.