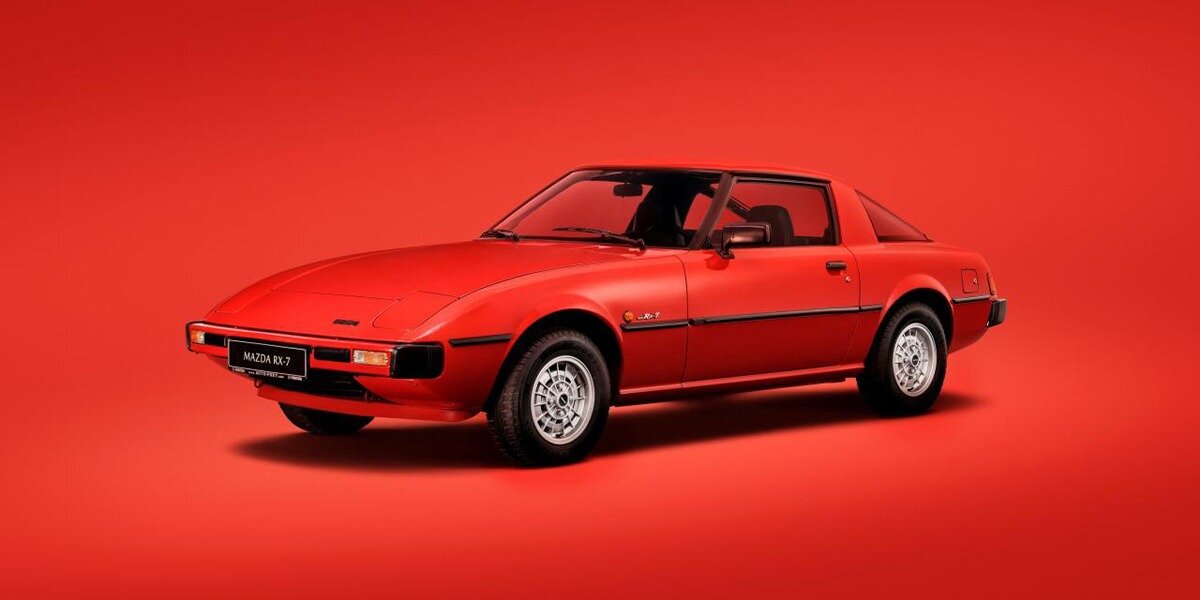 Launched in 1978, the SA22C RX-7 was designed with the core principal of being a lightweight 2-door sports coupe that is rear-wheel drive with an upgraded 12A Wankel Rotary engine powering it.

Lead designer Matasaburo Maeda wanted a modern yet functional sports coupe that would also be engaging to drive. He placed the engine behind the front axle, helping with weight distribution. Because the engine was so far back, it gave the SA RX-7 a long and very narrow front which not only looked great but also (in conjunction with its iconic pop-up headlights) made the car very aerodynamic.

The long bonnet was followed by a raked windscreen, small roof, and sloped rear window which also acted as the trunk and gave the car a sleek and instantly recognisable profile.

The first RX-7 was internally known at Mazda as project X605, but at launch in 1978 would be referred to as the “SA22C” from the first part of the VIN. The SA22C was powered by an upgraded 1.1L 12B rotary engine matched up to a 4-speed manual transmission (optional 3-speed auto available).

In 1981 Mazda updated and released the series 2 RX-7, referred to as the FB. The FB had upgraded front & rear bumpers, wrap-around tail lights, and updated engine controls amongst other updates.

Whilst the car was marginally longer overall, it did shed 61kgs versus the SA22C. Now offered in a 5-speed manual (optional 4-speed auto), and higher spec models offered front & rear disc brakes as well as a limited-slip differential. The Savanna RX-7 Turbo was launched in Japan in September 1983 with 121kW @ 6,500rpm with a specially designed “impact turbo” to deal with the different exhaust gas characteristics of a rotary engine.

The series 3 RX-7 was launched in 1984, still referred to as the FB. This release now offered a top-spec model that were powered by a fuel-injected 1.3L 13B RE-EGI engine which increased power to 101kW and 180Nm.

The first gen RX-7 was an instant hit thanks to its modern design, affordability, and performance. Produced between 1978 to 1985, Mazda produced a total of 471,018 RX-7’s, not only cementing its status as a sports car icon but also helped the RX-7 become the best-selling rotary sports coupe of all time. Success wasn’t just limited to the showroom, with the SA/FB RX-7 going on to compete around the globe and succeed in a myriad of different championships.

Victories include taking the GTU class win in the 1979 Daytona 24 Hours and championship victories in the 1980 & 1981 British Touring Car Championship. With victory in the 1981 Spa 24 Hours, the RX-7 gave Mazda’s first outright 24 Hours win. Driven by Pierre Dieudonne and Tom Walkinshaw, the RX-7 became the first Japanese company to win the famous Belgian race.

The 1st gen RX-7 was such a success it went on to evolve into a 2nd and 3rd generation (each iconic in their own right). Paving the way to make the RX7 the best-selling rotary-powered sports coupe ever. The RX-7 was a continuation of Mazda’s commitment to creative design and engineering solutions to produce cars that instil the spirit of Jinba Ittai (horse and rider as one).

With the RX-7’s lead designer Matasaburo Maeda, the apple certainly didn’t fall far from the tree with his son Ikuo. Ikuo Maeda would go on to not only design the Mazda 2, latest gen Mazda 3 and MX-5, but also the successor to the RX-7, the RX-8! Ikuo continues his work as Mazda’s design chief with other notable concepts like the Vision Coupe and RX-Vision launched recently.